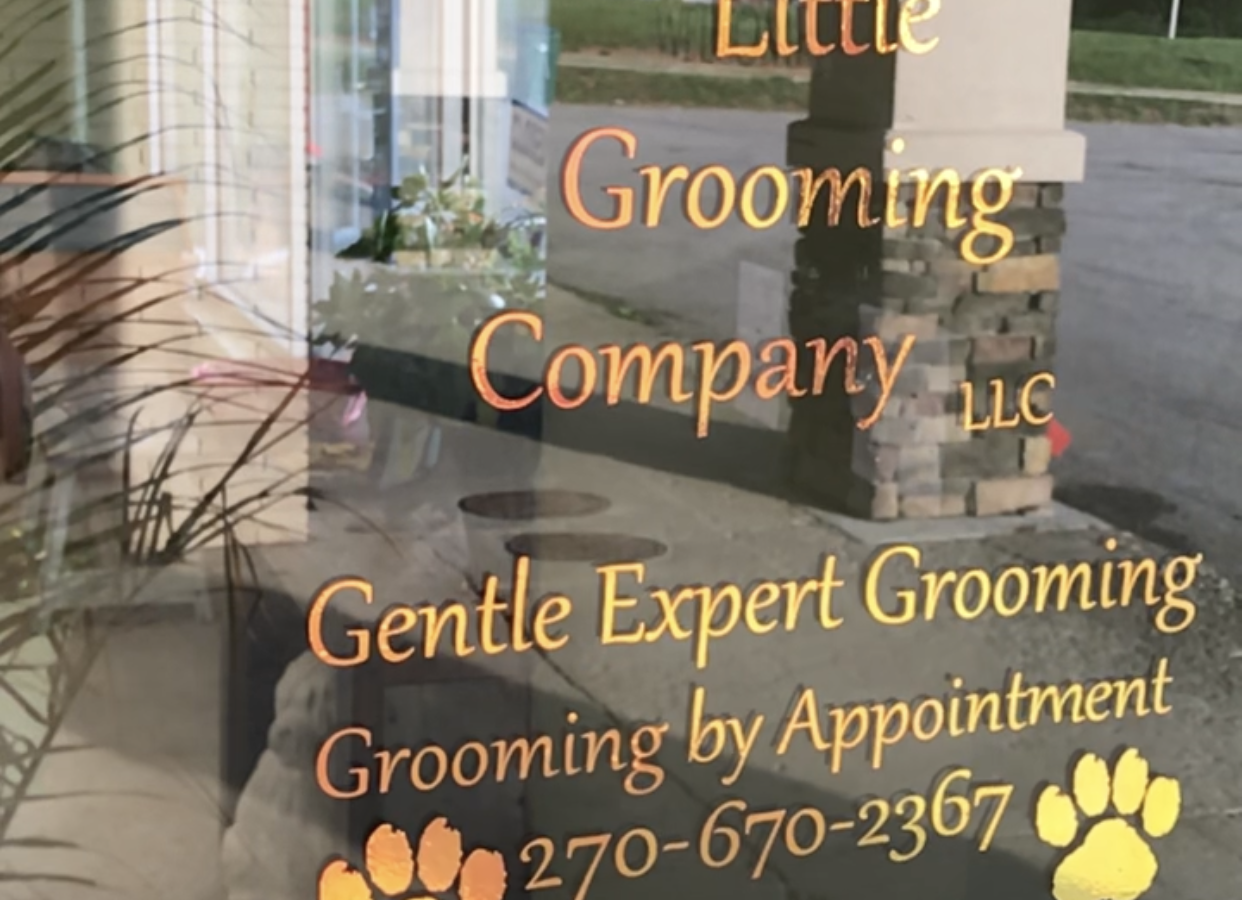 “The office’s business filings division helps businesses comply with various statutory obligations from the time business is formed, during its existence, and through any eventual dissolution. The business records division provides certificates of entities’ registration and authorization to do business in Kentucky. The business office also processes applications for and maintains records of trademarks and service marks registered in the state. The UCC division is the state repository for financing statements regarding security interests. Many of these services can be accessed online. Finally, the business records division process notary applications and issues apostilles and authentications of official documents.” Kentucky Secretary of State

It’s supposed to be renewed each year which is not really business friendly. Most states have longer or indefinite registration. In 2016 I was late in my renewal. In 2017 it literally completely slipped my mind. To complicate matters worse, I had stopped recieving mail at my home address due to tampering and the mail was not forwarded to my salon address and the state had my home address on file. So my registration was dissolved. I had no idea. Some have questioned how I could forget something so important. I guess it’s not as bad as forgetting a mammogram appointment…. shit happens right?

This state registration only regulates business names and does not regulate ownership of a name. That’s another department. However, common law trademark laws do protect me from having my name taken from me but does not prevent someone else from using it. And I really never thought it would be an issue. But I also never thought some bitter old hag would become completely and totally obsessed with every aspect of my life.

Lisa Duran Hyphen Luthi has been mentioned in this blog. She’s a psycho stalker in every sense of the word. She’s not only dedicated all of her free time to following and documenting everything I do, think and might think on the FB page she made about my family, but she’s actually stalked us at home, work and even in public places she knew we would be. She is so dedicated to being a psycho stalker that when my business name expired she actually knew about it before I did and she decided to register it herself. That is how I found out my LLC was dissolved. Sally Davis wrote a blog about Lisa Duran Hyphen Luthi and her “new business”.

I don’t know or care to know how Lisa Duran Hyphen Luthi first began harassing my family but I recall her being an aggressor in June 2015. That’s nearly 3 years. I’ve never met this woman except for the day she followed my husband and I to a court hearing in 2017. I do feel she is so fixated with her obsession of my family that she is dangerous. I’ve taken her to court to get a protective order but the courts decided since she had not made a direct threat to me, the order was not granted.

Now I understand I let my registration lapse. And really if some random person just so happen to come up with the same name and used it, fair is fair right? I would be agitated but I would have let it go. Lesson learned.

But Lisa Duran Hypen Luthi, Debra Deborah Debby Deb Whitehouse, Sally Davis and Al “I’m not involved” Wilson have used this opportunity for malicious purposes. It really has nothing to do with a soap/craft business. 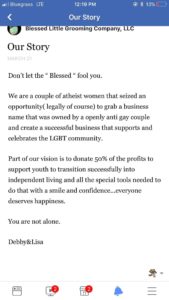 This is the story of the business. Published on their page March 21 and as of yesterday afternoon it’s still up. They admit they seized my business name. But why? I mean if you aren’t going to open a soap business why not come up with a better name? Like maybe Rainbow Connection Beauty Confections? C’mon. Be creative!! But they say “grab a business name that was owned by an openly anti gay couple”. I have no need to defend myself from that statement because anyone who knows me and my husband know that we openly advocate for all individual rights and that we openly defend people of all races, religions, gender and orientations. We really don’t care what you do with your own self so long as you don’t violate our rights. We have LGBT friends family and clients and we are supportive of them.

This next screenshot was taken on May 3rd. It’s been removed from the page as I was unable to find it yesterday. 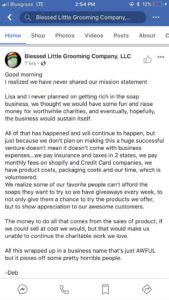 So they only use the name for malicious purposes to get back at some horrible people? We are “horrible”. These people are fixated on us, obsessed to the point of making an actual business to harass us, but they can’t ever say what we have done to make us horrible. They come up with a few things, like my arrest photo for resisting arrest. And a bounced check from like 20 years ago. They have lost of documentation of us defending ourselves. They will talk about how they don’t like how we live. Bullying us for our lifestyle choices while ironically saying they are advocating for someone else’s lifestyle choices. They are just hateful and obviously very miserable people who enjoy  using people. They have used my neighbors, they have used individuals who they felt could be a tool, they have used local organizations they have used entire movements.

So what about all this money they are raising? Well seems some of it is used to further harass my family. When you buy their products you fund the harassment of my family. This was the first glitter bomb sent to me on April 12. We have received 3 total.

”awarded to the Naugler’s for The Long Game”

”good luck in your future endeavors, you’ll need it” 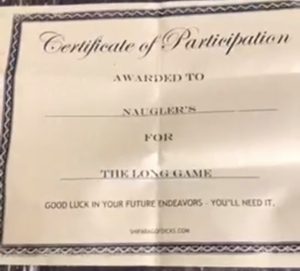 While a glitter bomb seems harmless fun if it was a friend it would seem funny. But this was malicious. Not to mention my 11 year old daughter was the one who opened it. And it was a threat. What is the long game?

When you look on their website most of the stuff seems harmless and random. But it’s not. They are used as a tool to harass and intimidate. This bar of soap was posted on March 13th. They have used this term in their blogs as well. Many of their products have hidden and not so hidden messages. 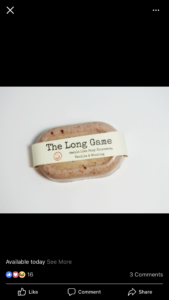 The soap company is just another way for Lisa, Deb, Al and Sally and their minions to continue the harassment of my family. They do this simply because they enjoy hurting others. They have no care that their behavior has impact on my clients and my chidlren. They actually enjoy it. They have even directly harassed my minor chidlren.

My registered business name is now The Original Blessed Little Grooming Company, LLC. It’s only used for state registration and my business cards, brochures, websites etc will continue to legally use Blessed Little Grooming Company LLC. If Lisa Duran Hyphen Luthi has an issue she is welcome to take me to court. But she won’t. She knows why. Even a flunky lawyer knows when they don’t have a shot in hell. And she wouldn’t want to have to justify her continued bullying, stalking and harassment in a court of law, especially since the last time to she told a judge she was talking her page down and then put it back up after the dust settled.

I worked very hard to build my business. BLGC provides for all of my families needs. I love my business and I will not allow a group of hateful people to cause harm to my family or our business. I don’t care what Lisa Duran Hyphen Luthi and her friends sell online so long as it doesn’t involve my life. If they want me to leave it be, they can change their name, remove any reference to me, my business, my family and move on.