So after a long day at work I come home and was planning to work on some blogs, but I didn’t expect to have to write this one. But I guess one of my “previous employers” got her panties in a wad. And wrote a bunch of dribble for the tabloid blog.

Patricia really, you don’t have much room to talk. I’ve been to your home where you keep dozens of animals locked in cages in your house 12 hours a day while you work. The smell was nauseating. Maybe it was my super sensitive pregnant nose, or maybe it was off putting to everyone who stepped foot in there. I won’t presume. I will also refrain from posting the screen shot where you stated you would throat punch a client who was having a hard time financially and brought you a dog who was in rough shape. She trusted you with her dog. She was getting it taken care of. But this post isn’t about you. This post is about me. 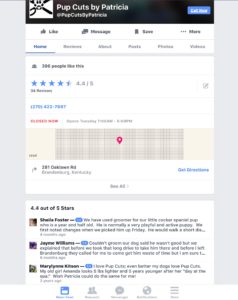 I started at pup cuts after Christmas in December 2013 and immediately began marketing the business to build clients. I began networking the FB page likes and was posting photos as I do now. I later removed them from the page, then removed myself when I realized that I was not returning to Pup Cuts.

Now to what Patricia said about me and my family: 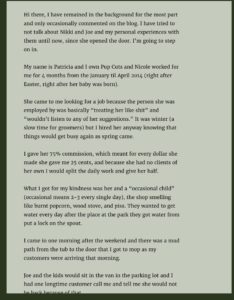 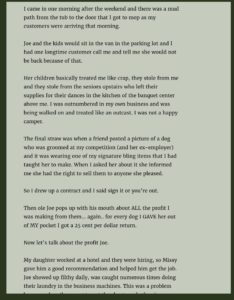 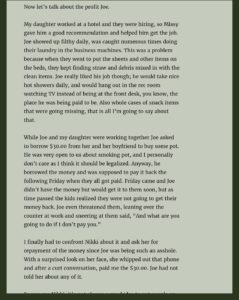 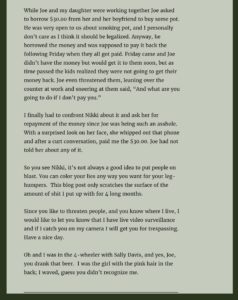 Im not going to defend all the insults and accusations. But I do want to make a few things clear. My husband dropped me off at work often as I was 8- 9 months pregnant and we had one vehicle. I have no idea why a customer would be offended by my husband dropping me off or waiting to pick me up from work. I only brought one child at a time to help me with work. She claims I put her on blast with my blog about my business here’s what I wrote about her ….

The new job went great for the first month. But as time passed the tone changed. I was advised to look into the legal side and I did. Most groomers hire as independent contractors, when most if not all are simply misclasified employees. It was, like my previous jobs, just an under the table work. I was ok with that. My only goal was to feed my family. I worked up till the day before Mosiah was born. When I inquired about resuming work I was sent a contract. I disagreed with the terms (one being that I was not allowed to sell MY bows to the groomer I had previously worked for). I found work at yet another salon, trying to decide what to do next.

That’s a blast? But let’s presume all of the things she said were true, why even offer me a contract to begin with? You would think you would dissolve all association after all the hate and spite you had for us. 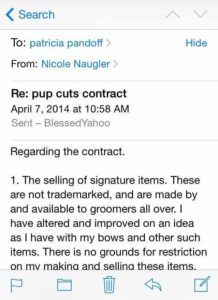 The contract was posted and I’m not clogging the post with screen shots, but this was my response

1. The selling of signature items. These are not trademarked, and are made by and available to groomers all over. I have altered and improved on an idea as I have with my bows and other such items. There is no grounds for restriction on my making and selling these items.

2. Regarding clients. I understand that your clients are your own. I do want to address how new clients will be handled. As far as the publicity of the marketing new clients are solicited often by word of mouth but they won’t know to ask for a specific groomer. They usually will say ” I took my dog to Pup Cuts”… As it is now, the marketing I have done since I started has brought the FB page from 211 to 284 and all of the new clients we have generated from that has increased business. However, since I was pushing Pup Cuts, I was not soliciting clients for me personally. This will continue as the general public sees the shop as a whole and not two individual businesses. We need to address a way to handle new client inflow fairly.

3. Regarding equipment. When I started I told you I was short on equipment ( dryer etc) and that I was working to replace those. This has still been a challenge as we have been slower than expected. Will I be allowed to use said equipment on a temporary basis?

I also want to address that when I approached you in December regarding employment, you clearly stated you had an abundance of clients and needed a second groomer to pick up the slack. I understand the weather was an additional burden, but you have made me feel like I was somehow infringing on your business. I took this job with the understanding that I would relieve your overflow and build up my own clientele after the baby was born. I was still working towards that plan.

You claimed that we have needed an increase in shampoo and towels. That would show that we in fact were grooming more dogs. Which is a good thing.

After we spoke on Saturday you were very angry, you sent me a message saying you were pissed then posted the FB meme with the same tone. I was not asking for pity. I was hoping things would work out in both our favor as we built up the grooming clients.

note: I worked up until March 29th, the day before Mosiah was born. 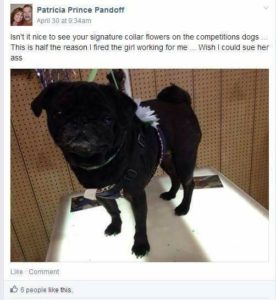 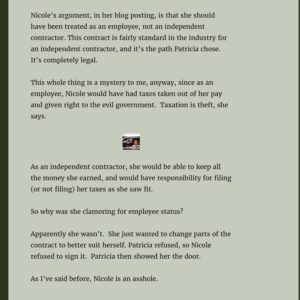 Misclassified employees are common in the grooming industry but do not follow the IRS guidelines. The 20 factor test as described in this blog, layout the same criteria for groomers as it does hairdressers. If Sally has paid attention, the bigger misclassified issue was with a business I worked at after I left Pup Cuts. Maybe she can get them to write a guest blog too.

How You Can Be “Off Grid” and Still Have Internet