One of the most fascinating things about the Internet is how fast misinformation spreads compared to truth. Put some gossip out there and it’s in everyone’s hands. Post the truth and only a few will read it. Periodically I will be posting bits and pieces about the troll phenomenon and the misinformation the half assed wanna be journalists are presenting.

For some reason our white buckets are a popular topic. “Where did they come from, what are they for, how many do you have”..  They come from the Walmart bakery, they are mostly for food/water and we have about 60. We have mentioned them in a few blog posts before. We do not use those buckets for the compost toilet. We have other buckets specifically for that use. (And its composted, not stored)  These white buckets are the ones used to store dry food and clean water. The older ones get used for outside projects such as gathering wood for the rocket stove, picking up trash, hauling feed, etc.

Beyond the white buckets is a post made on homeschoolers anonymous by, of course, an anonymous person. By deduction (from this posts pictured here and a few others this person made) based on some of the half truths, I can say it was written by one of 5 (groups) people. See back in January of 2013 Joe spent 6 weeks in jail awaiting a hearing because of a missed court date for his child support. As soon as he got in front of the judge, she let him go home, but it took 6 weeks in jail, for him to get to court. This made home life extremely difficult. I was under an enormous amount of stress as were the children. But this comment from someone who visited during thst time has been reposted numerous times in FB and blogger websites. As if it’s somehow indicative of the horrible people we are.

During that time, we had few visitors. We had only been living in this place 2 weeks when Joe was arrested. A local friend came by twice to baby sit while I went to work. He and his wife also came over to visit and deliver groceries as we were without a vehicle. A friend from out of town once came  up with her husband for the day. The landlords daughter came over. Two ladies from church came by. A couple from church who lived down the road came by a few times. And the Bishop and his wife came by with groceries. (Click image to see larger) 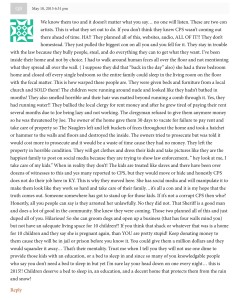 It was cold (January) and it took a lot to heat this large double wide trailer. We closed off half the home to conserve heat. We had a working indoor toilet. We didn’t start composting till we moved to the homestead. We slept in my room or the living room. Where ever the children wanted to. Usually the littles were in my bed. The older ones camped out with couch tents in the living room. We had a kitchen, living room, laundry room, bedroom, bathroom and school room open. The other living room, 2nd bathroom and 3 bedrooms were closed off. There was no feces on the floors and walls. And my god, if there was, why wouldn’t this good upstanding warm hearted individual do something about it? Did she/he help an emotionally and physically exhausted mom of 10 clean up? Did she/he contact authorities? She/he claims we run every time CPS is called but this was January and we lived there till October. CPS never showed. We moved because the property owner wanted to sell it and we didn’t want to buy it.

There have been various accounts of my husband threatening the local bishop. They claim he threatened him for not giving us cash, paying rent, giving food etc. It is true Joe and the bishop had words over the phone. But it was regarding my FB post referecing PTSD, soldiers and scripture. It had nothing to do with the church welfare program. This was in June? 2012. We got food from the LDS food pantry a year later in 2013. See how rumors get twisted?

Other things in this post are just as absurd. My children are obviously not posed in pretty clothing for photo ops. I take photos on the fly. Real life as it happens. Aside from Olivias wild hair from her love of wearing hats, my children have well groomed hair. I give the boys haircuts every 6 weeks as they like it short. Abigail has always been very attentive to her hair braiding, adding flowers, bows etc. They play hard in their play clothes and on occasion, they dress up. That’s our life.

All of our furniture have been free cycle type finds. We don’t buy furniture. With a large family like mine  it’s not worth it. We take what others are giving away. It’s not secret my children are rough. We didn’t sell any furniture or any other donations. When we left the double wide we also left the refrigerator as we no longer needed it. I don’t recall the las time I sold anything. We pass along things we can no longer use.

The accusation of us being a con is as equally ridiculous. It’s true I document my life. It’s not a con or a scam. I’m thinking back on a comment back in May or June. One of my best friends, someone who has known us for 7 years, was told her opinion was bias and therefore not credible because she was our friend. But yet anonymous posts on the Internet are some how credible.

I don’t ask you believe my every word. But I do ask you use logic when deciding which stories you believe and if and how they are relevant. One would think if we are the violent con artists these anonymous people claim we are, why is there no evidence of it? Even the recent menacing charge ( which I will expand on in another post) isn’t a theft, robbery, or even terroristic. It’s menacing. Basically means there was a perceived threat. And it was a plea deal. It was truly a case of he said she said. And as you have seen, people say some outrageous things without anything to back up their claims.

How You Can Be “Off Grid” and Still Have Internet